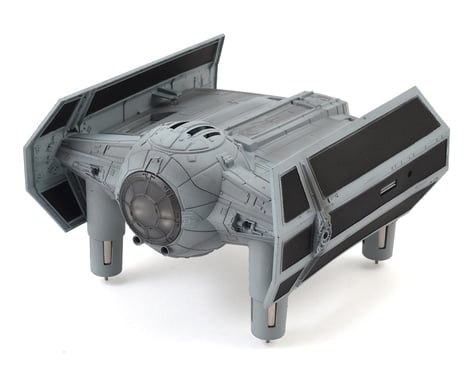 Previous Previous
Propel R/C Star Wars Drones put the love and excitement of owning an exquisitely crafted piece of Star Wars history in your own home! Whether you're a casual Star Wars fan, or a full fledged all knowing member of the Galactic Empire, or Rebel Alliance, these are the drones you're looking for.

Inside each package includes everything needed to get the drone flying in a matter of minutes. After supplying your own AA batteries (four are required and sold separate), and giving the manual a good read, the drones are ready to provide you with hours of fun and camaraderie with friends and family. Whether you're a flight cadet, or a grand admiral, these drones provide flight conditions from tame to wild all easily accessible with a click of a button.

Aerial stunts, high speed racing, and defending your home base from invaders are all some of the features offered with each drone. Stunts can be access with the quick press of a button, allowing you to out maneuver and escape near death laser blasts from your enemy. With speeds of up to 35mph when promoted to grand admiral, no member of the Rebel Alliance will be able to out run Lord Vader himself, nor escape to destroy his beloved Death Star.

Take part in an epic battle of up to 12 total drones, each drone comes equipped with a power IR transmitter that are used to fire a wide beam laser against your enemies! After a total of 3 direct hits you're out of the fight and must continue on as a spectator. Life LEDs equipped on the radio display your ships status, and provide you with a quick idea of what condition your cruiser may be in.

This product was added to our catalog on January 17, 2018